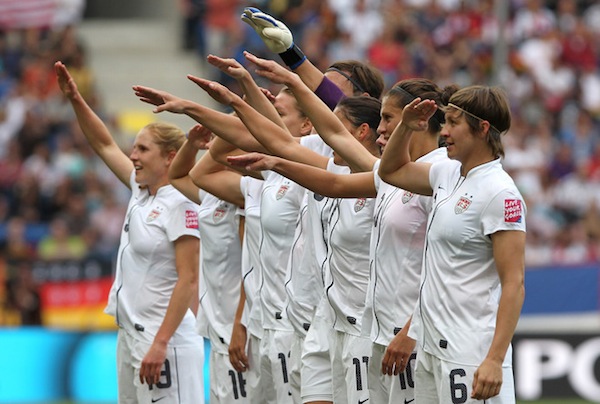 OK, so wow, France is doing much better than expected, and my US team is looking like their number 1 rank is deserved.  I am relieved and will go forth being overly optimistic for them because I love them so much.

So, my predictions for the rest of the group games.

France and Germany are tied on points, but France has a much better goal differential, meaning that all they have to do is tie Germany to move forward as the winners.  Germany is the favorite, but France has looked much better on the field — something I definitely did not predict.  I’d like France to win and that, more than anything, is leading me to say that France will win the group, and Germany will be second.

Japan is definitely going forward, so the competition is between Mexico and England.  England is well ahead in goal differential, so they can lose to Japan and still move forward, which is exactly what I think is going to happen.  Japan first, England second.

This is as fun as Group A, because the US and Sweden are literally fighting for the number one slot.  Like France, all the US has to do is tie to win the group.  I think they’re going to outright beat Sweden, or at least that is my hope.  US number 1, Sweden number 2.

I simply cannot see Brazil not creaming Equatorial Guinea, which may be very fun to watch, so the competition is now  for second place between Australia and Norway.  Norway has not been impressive, but Australia’s defense has been lax.  Australia just has to tie Norway to move on, and I think they’ve got that in them.  I’m saying Brazil 1, Australia 2.

So if the games followed this prediction, we’d end up with the following matches.

I’m tempted to say France, as surprised as I am by that.  This seems like a very close match to me.

Should be a great game as well, but I think Japan is going to be tough to beat.

Match 27
US vs Australia

This should be an easy win for the US.

This should be an easy win for Brazil.

I think this is Japan’s.

SemiFinal C/D
US vs Brazil

Man, this is tough.  I don’t know.  They are my two favorite teams.  I think Brazil is weak in their defense and the US could exploit it, but sometimes it seems like the US barely even shows up.  I’m going to say the US, but I would be thrilled to see either one of these teams in the final.

Final
US vs Japan

So, I’m beginning to think that unless you’re from Central or South America, you’re just here to disappoint me.  And I’m not sure that that’s even right because I wasn’t impressed with Brazil.  Even the Germans, who looked unstoppable after their total destruction of Australia, have lost to a minor team.  I guess that’s the great thing about World Cup, it’s unpredictable.  I dunno if you remember who my favorites originally were, but they are now officially 1) Uruguay 2) Argentina and 3) Mexico.  Favorites, of course, not being who I think will win, but who I want to win.

Argentina, 4-1, is looking pretty good offensively, especially with the first hat trick of the Cup going to Gonzalo Higuaín, but they let in a goal with a pretty intense lapse of defensive attention.  Still, they’re looking good and might go all the way.

Greece wins!  For the first time!  Nothing like a good comeback story, especially when there’s a very obvious villain in the form of a Nigerian player, Kaita, who got kicked off the field for a blatant red card offense.  It’s what red cards are there for.

I admit that I actually freaked out with happiness when Mexico scored it’s first goal against France.  The second was just icing on the cake, because it’s almost impossible for France to advance.  This is two part, because I like Mexico and I know some people really enthusiastically cheering for Mexico, and also I hate the French team.

WTF Germany?  How do you lose to Serbia?  This is one of two games this day that were dominated by over-refereeing.  I mean, the sheer number of cards thrown out was absurd, especially considering how mild some of the fouls were.

Oh, let’s talk some referee bullshit.  The US was robbed, absolutely robbed, of a third goal.  They should have been moving forward with a win rather than a draw.  Still, the US will move forward if they win their next game, which slightly makes up for it.  But the lame-ass ref also gave a yellow card for an intentional handball that wasn’t.  Very irritating.  I read that the ref is probably going to be not allowed to ref any more World Cup games.

Group A: How to Advance

Group B: How to Advance

Group C: How to Advance

To give you an idea how accurate predictions are for the world cup, compare this post to what has happened today.

Right now, Mexico and S. Africa are technically in the lead in Group A. Both games (Mex v S.Af, Uru v Fra) ended in ties, but since both Mexico and South Africa have scored 1 goal each, they’re technically ahead of scoreless Uruguay and France. Uruguay also earned the first Red Card of the games, and managed to keep it tied with only ten men on the field.

What we’ve learned today is that S. Africa is beating expectations and making itself a contender, Mexico may continue its streak of disappointing World Cup showings, Uruguay is fantastic on defense but not so impressive on offense, and France is inconsistent. In my dream world, Uruguay and Mexico would move forward. With everything tied up, the remaining games have much greater pressure on them, but everyone is going into them without having to catch up. The game with impossible odds seems to be S. Africa v France, but if France continues to be inconsistent and S. Africa can ride this high, they may have a chance.

The other thing I learned is this: There are some super cute guys on the Uruguay team.

Let us pretend I’ve spent no time on this and am merely grabbing some things out of a random hat.  The following are 6 games over the next few weeks that I think will be entertaining, in order of appearance, all times PST.

England is hungry for another cup, but their line-up is a bit wobbly.  These two are probably competing for number 1 in their group, and will both make it out, but this game will show us if the US is going to actually do anything worthwhile and if England is going to make a real run to repeat ’66.

These are the two extremes; Brazil is FIFA rank number 1 and Korea DPR is number 105, the lowest in the competition by nearly 30.  Perhaps I’m a sadist, but this could be extremely fun to watch.  It probably helps that it’s really easy to hate North Korea, though there are some worries that there will be negative consequences for the players if they embarrass their dictator , so maybe it’s easy to root for the incredibly downtrodden underdogs?

I generally think that the France, Uruguay, Mexico triad is going to be fun to watch, I think they’re very closely matched.  And I think my soft-spot goes to Mexico.

They’re closely matched in terms of talent, likely this will simply be for first, so not quite as much pressure, but I think we’ll see here if Argentina is going to be a real challenger.

Probably the most anticipated match of the knockout rounds.  Brazil, number 1, against Portugal, number 3.  Plus, they like speak the same language and stuff.