Liveblogging the Women in Secularism Conference I

10:00 Minority outnumber white babies panic. Rebecca would like to defend skeptics from the charge of being more male and more conservative, but she cannot. Rebecca talks about feminism and skepticism, NH would have forced doctors to give pseudoscience to women before abortions, angry emails were sent in that misinformation given to women seeking abortion are not a science issue. Contraception is not science. This happens every time she mentions an issue involving women.

Atheists are a little better than skeptics. They seem to leave issues that involve women to the feminists even when they are appropriate, like killing witches in Africa, or female genital mutilation. Of course, every time FGM is brought up, the first thing brought up is BUT MY PENIS WAS CIRCUMCISED. Rape threats in response to her talking about it.

Secularists get that religion is dangerous for women and generally want to protect women, but it’s somewhere below crossing out In God We Trust from their dollar bill. But they more or less get it.

In Australia there were Muslim protesters and the atheists started chanting “Where are the Women?” in protest. Apparently unaware that none of the protesting atheists were women.

9:51 Talking about the horrific billboards that said that “The most dangerous place for a black/latino child was in the womb”. This propaganda informs legislation.

Portrays women of color as dangerous breeders. Hispanic women drop anchor babies and are a threat. The horrific edit of the Violence Against Women Act which disenfranchise undocumented and lgbt women. We need to have an awareness of women of color. There are almost none in the room. I say almost none, but that’s generous in that I’m pretty sure the only women of color here are speakers.

Women of color are disproportionately sent to prison and disenfranchised and denied the ability to make minimum wage because of felony laws.

9:48 I love Sikivu’s voice. Not really not important, but true. She’ s from South LA, police terrorism was and is a fact of life. Darryl Gates (sp) was the white supremacist in charge of the LAPD. Eula Love was killed by two officers after allegedly wielding a knife, the first protest she remembers to go to. It was hard for her to believe at the time that a mother was murdered in her own home, home was supposed to be safe space and private sanctuary. For black women, home has not traditionally been safe space because they are less than human, less than female, sexualized, racially other bodies for public control.

We can not frame the so called war on women strictly in terms of a christian backlash if we are not looking at the degree to which women have been institutionally denied reproductive freedom through mass incarceration. Black and hispanics are presented as dangerous breeding. Calling out South Carolina for locking up poor women that the rights of the fetus supersede the rights of the mother who uses dangerous substances. Fetal homicide, where women are not only worth less than fetuses, but should be put in jail for not taking appropriate care of themselves.

9:40 Panel on intersection of atheism and feminism. Annie Laurie Gaylor introducing, from left to right, Sikivu Hutchinson, Rebecca Watson, Ophelia Benson, Jennifer McCreight. I do not know Annie or Ophelia, so it’s exciting to see them. And always exciting to see those I do know. 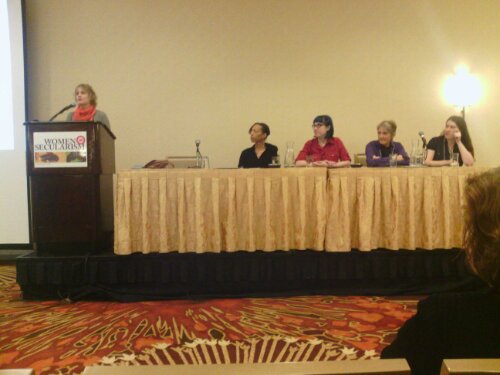 9:37 I just met Edwina Rogers. Yep. I will talk about that later.

It’s intellectual, and we all know that’s gay and nerdy, but she doesn’t think that the perception of men is the reason that there’s difficulty building communities. The more they are a minority, the more vibrant. It’s not the same draw in secular places like NY or DC because it’s not hard to find people who think like you. Churches sponsor lots of things, but secular orgs are not as deeply involved in volunteer works, not involved in dating mechanisms. Meeting a secular guy it’s not so easy. What’s primarily needed is for local secular groups to be more involved in local education. Defeat of intelligent design curriculum like in Dover Pennsylvania, women were deeply involved, because they care about things that impact their families and offer outreach on activities they’d be involved with anyway.

9:21 Fundamentalist problem: I think I have the absolute truth, how is that not a gift rather than an imposition on a non-believer?

Do you think women who are secular are seen as immoral because are perceived as being a hedonist?

The idea that religion is the only thing that keeps women from uncontrolled sexuality is very old and very strong. Feminists were not cute enough and couldn’t get men, but also they wanted to throw everything out and have all of the sex that they wanted. These issues are easier for men.

Why aren’t there men, why isn’t there a panel for how men can help, why didn’t we try to get more men here?

She doesn’t think the gender balance would be any different with a new panel, even if that’s a good subject, but that’s not why there aren’t men here. They aren’t here because they see these issues as not important and not a primary issue. This conference is a good start, the first of its kind, but these panels BELONG in regular conferences. There are places for these issues at every conference we hold. Especially on science and education. Things have not changed enough, and women are the primary educators and caregivers. Secular organizations, if they want more women, are going to have to address this. The reason men aren’t here isn’t because the conference isn’t welcome, but because men in the movement don’t give a shit about this. Paul Kurtz was a philosopher and hired philosophers, which was a field that has always been hostile to women.

Her full speech will be cleaned up and made available eventually. This is being recorded and will be available.

What are the symptoms of anti-religious dementia?

A craving for chocolate when you would otherwise be at church. Disagreeing with everything the vatican says. Wearing clothes that show the shape of your body.

Why are so many secularists dogmatic to the point of rudeness?

There are dogmatic atheists and secularist, who treat the religious as stupid. And that isn’t true and a bad tact, not because i am kind and gentle, but because no one responds to being told they are stupid. 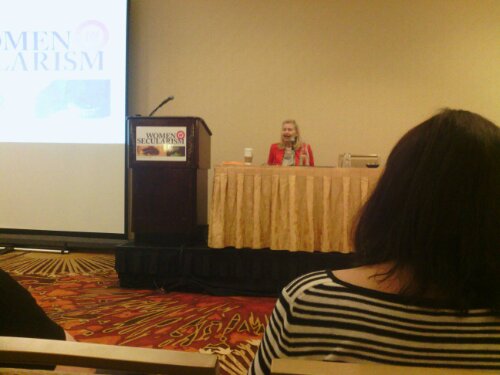 9:08 Separation of church and state should be non-partisan, but unfortunately the Republican and Libertarian parties are dominated by the religious. This means that economic conservatives.

There are not many men here. I would say that the ratio is maybe ten to one. Women’s Rights is not a position taken for granted in the movement, for some unfathomable reason.

Topic switch to Muslim women rights. She argued with Dinesh D’Souza (sp) last week. He says the left is responsible for 9/11 and is trying to undermine the family and promote secular values. You know, like not cutting off genitalia or murder women in retaliation for her dishonor. Yep.

Am I allowed to call him a douchebag? Cuz that’s what he is. Just saying.

This crowd doesn’t know about the event last week of the catholic baseball team refusing to play against a team with a girl on it because it would not teach boys proper “respect” for women. I will try to find a link to it during the break.

9:03 Talking about Ingersoll and Elizabeth Cady Stanton, and how she was written out of the suffragette movement because she was not religious. Ingersoll felt that the vote was necessary but insufficient for equality.

Stanton wasn’t really rediscovered until the 1980s and the second wave which focused on similar issues.

Women downplay the importance of secular women in the feminist movement, it’s not talked about or written about, because the religious right accuses them of being Godless. Secular women are more likely to be feminist than anyone though there are exceptions. Ayn Rand. UGH.

There’s a real division between secular humanism and secular conservatism. Humanist and skeptic seems to be the labels there. Skeptics are more male oriented. Yeah. Skeptics are dudeified.

8:55 People are embarrassed by Madalyn Murray O’Hair and they avoid acknowledging her importance in the movement. Unlike Gloria Steinem, she was not traditionally feminine. There was nothing soft about her, nothing that made her “acceptable” to the public.

When Jacoby was given the FFRF award a secular man said that they’d “done a lot for the movement for showing that an atheist woman doesn’t have to be a shrill bitch.”

Many deny the secular nature of the feminist movement, probably because the religious tries to take credit for civil rights movements. You know, cuz the church in the south didn’t fight bitterly against civil rights in the 60s and the KKK isn’t a Christian organization. King’s religion was important, of course, but it was not the only position of religion. Unlike this, women’s rights was never assisted by the religious.

There’s so much history in this, it’s a dense and a little hard to follow. No slides to help. I mean, I hate powerpoint, but there are so many names being thrown out that, unless you are very familiar with the women and the history, it’s a lot.

8:48 Being called soft and the general misogyny isn’t going to deter her, but it does make younger women less interested in participating, not least because the movement in general seems “quaint” and of the 1960s. Being an “atheist” is something she simply was, it wasn’t her concern, she wanted and is primarily a writer.

Madalyn Murray O’Hair is now being discussed. Because she was a woman, it was easier to dismiss her and atheism as nutcase. McCullen called herself a humanist which was less confrontational.

I am going to misspell names before the day is out and probably many times. I am liveblogging and googling takes too long. Forgive me.

8:40 She wants to know why there aren’t as many women in the movement. Even taking into account race and education, being a woman makes you more likely to be an atheist. African American women are better educated than African American men, and they remain the most religious demographic.

Men occasionally assert that women are more religious simply because they are stupider. This got a laugh, not even a rueful one. Laughing at 8:40, these people are definitely more awake that me. Oh, Angry White Guys. Lol, they called her “Suzie”, which is better than “Ugly Old Atheist”. Man, shades of Ron Paulites.

“I place as much value on anonymous comments made on blogs as I do on statements of eternal love made after a late night drinking at a bar.” 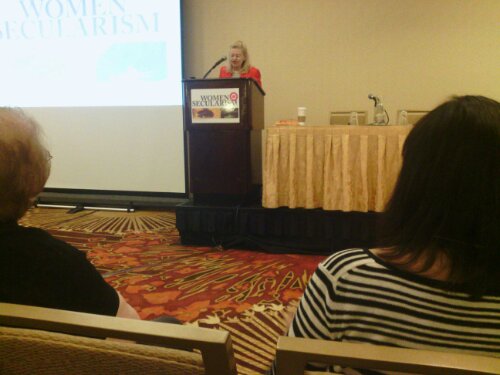 8:36 Susan Jacoby is now up. She wrote the book “Freethinkers” which is a lovely history of secularism in the US.

8:11 Good morning! I will be liveblogging here in reverse chronological order (newest first).  Conference starts in 20 minutes and I need to obtain caffeine.  See you soon.

Posted on May 19, 2012, in atheism, feminism and tagged cfi, liveblog, women in secularism. Bookmark the permalink. 11 Comments.